"The End of College: Religion Departments and the Battle Over an Ideal" 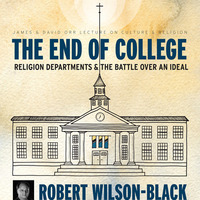 "The End of College: Religion Departments and the Battle Over an Ideal"
Robert Wilson-Black
CEO, Sojourners
Founding Board Chair, National Museum of American Religion

Abstract: "Religion departments made their way into institutions of higher education in the 1930s to the early 1960s, at a time when significant shifts that transformed the college into the university were occurring. Higher education leaders found they were losing sight of the college ideal and hoped religion as a taught subject could bring back moral formation, a curricular focus on personal piety, and national unity. Protestant Christian leaders created religion departments during this shift in educational ideals—while religion professors themselves attempted to create a legitimate academic subject quite apart from the piety of chapel programs, narrow moralizing, and, above all, the centrality of Western Christian thought championed in the college model. Religion departments at mid-century were a response to the lack of an agreed-upon curricular center in the wake of the very changes that spelled the end of the college ideal, attempting to provide a cultural and religious center that might hold. That hope was never realized. What remained in its wake were specialized religion departments seeking entirely different ends that helped to cement the university model."

Per current Dartmouth College covid policy, all attendees are required to either present their Dartmouth ID OR show proof of vaccination or negative PCR covid test via the bindle app, upon arrival at the auditorium. Details about Dartmouth College Health & Safety policies are available HERE.

The ZOOM recording of the lecture is available, here: https://dartmouth.zoom.us/rec/share/E7yr3cvc6aWrL_4wZaoUVGPu5JiI17bU5R_vAk3Mq2LghUjTROabzQuTlbpb4PwK.Q2cAKjtt2-q5Z64V?startTime=1642108720000