As part of the on-going efforts to transition to an actively anti-racist department at Dartmouth College, the faculty of the Religion Department announce the establishment of a series of panel discussions and colloquia focusing on the intersection of race and religion. This initiative is being undertaken in response to the distressingly frequent incidence of racial violence not only in the United States but in many countries throughout the world.  Sadly, religions have played important roles in encouraging and legitimating racial and ethnic oppression. However, religion has also inspired extraordinary acts of resistance and critiques of racial injustice.  These series of events will explore the complexity and volatility of the relationship between race and religion, not only in the United States, but in other parts of the world.  Each forum will allow time for discussion and will be open to students, faculty, and staff of Dartmouth College. 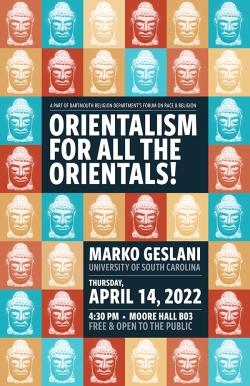 Lecture title: "Orientalism for All the Orientals!"
Abstract: "For better or worse, the study of religion harbors one of the last great bastions of Orientalism, the academic study of Asia, and especially its premodern past. And the endurance of this episteme casts an ominous shadow over current attempts at racial reform in the discipline, as seen in the growth of Black and Latinx religious studies. What would it take to reclaim the heritage of Orientalism in the name of the BIPOC erstwhile "primitives" excluded by its civilizing discourse? Can there be a Black-Brown Orientalism? This paper offers a positional meditation on the nature of this difficult problem, from the perspective of a Filipino American Sanskritist teaching Hinduism and Buddhism in the Deep South. Detailing the challenges in appropriating Asian classicism for nonwhite non-heritage students, I suggest that the proposal of "Orientalism for All the Orientals" in this fashion not only requires a continuation of Edward Said's critique in the context of contemporary American Orientalism, but also reveals the limits of secular history. " 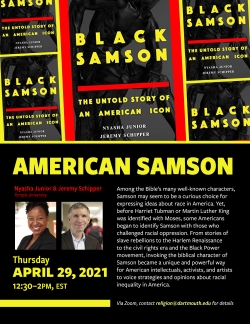 Abstract: Among the Bible's many well-known characters, Samson may seem to be a curious choice for expressing ideas about race in America. Yet, before Harriet Tubman or Martin Luther King was identified with Moses, some Americans began to identify Samson with those who challenged racial oppression. From stories of slave rebellions to the Harlem Renaissance to the civil rights era and the Black Power movement, invoking the biblical character of Samson became a unique and powerful way for American intellectuals, activists, and artists to voice strategies and opinions about racial inequality in America.

Abstract: While often associated with a liberal demographic, the increasing online visibility of rhetoric such as—"snowflakes," "politically correct," "postmodern identity politics," and "cultural Marxism"—demonstrates the presence of right-wing sentiments and populations in American convert Buddhism. This talk situates these sentiments largely as a reaction to diversity, equity, and inclusion (DEI) initiatives in these communities. We chart this backlash across a broad right-wing spectrum that spans from "reactionary centrism" to the alt-right. We illuminate the ways in which participants both de-legitimate DEI as political rather than Buddhist and naturalize their own position as Buddhist rather than political. Next, we show how American convert Buddhist lineages have become a site of the "culture wars," longstanding clashes between religious conservatives and progressives, that are playing out in multiple contexts across the U.S Finally, we locate these reactionary right-wing forms of American Buddhism in relationship to modern and postmodern forms of global Buddhism.