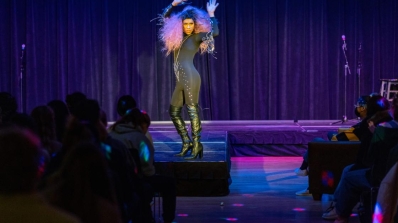 Seattle Drag Performers Take to the Stage at Collis

A free drag show at Collis Common Ground Friday night featured three performers from Seattle. "Dragmouth" was presented by the Department of Religion in collaboration with the Office of Pluralism and Leadership. The evening concluded with a discussion and Q&A facilitated by Sara Swenson, an assistant professor in religion.

On Friday, November 5th, the event organizers of "Dragmouth" stood outside Collis Common Ground, debating how to bar entry. The room was nearing capacity. A group of students hurried through the door just as Collis staff assumed their posts to turn away any more attendees.

Inside, friends and classmates greeted one another while searching for seats. A performance artist in a pink ballgown appeared to rally the crowd.

"We're running on drag time," the artist joked, explaining a ten-minute delay start. The disco ball shifted pink to match her gown. The music increased volume. Then, the tone shifted. The lights dropped to a gentle blue and a spotlight lit the first performer.

The drag show, "Dragmouth," was presented by Dartmouth's Department of Religion in Collaboration with the Office of Pluralism and Leadership. The performance featured three professional artists from Seattle's avant-garde drag scene. Three Dartmouth student performers joined the stage with their own numbers. The night concluded with a Q&A on gender, religion, and performance, hosted by Assistant Professor in Religion, Sara Swenson.

Swenson originally invited the Seattle artists to visit her class, Rel 1.11 "Sisters, Sages, Seekers: Women and Religion" for a Zoom discussion. When she mentioned the guest speakers to fellow Religion faculty, she was encouraged to bring the speakers to campus and host a show. Three artists – Miss Texas 1988, One, and Sugar Darling – accepted the invitation.

Swenson opened the Q&A by reflecting, "In 'Sisters, Sages, Seekers' we explore how women and sexual minorities around the world create communities of belonging and make life meaningful. Sometimes we call that religion. Sometimes we call that spirituality. Sometimes we call that drag." After an initial flurry of request for Venmo and Instagram account information, the discussion returned to this theme; a student in the back row asked what advice the performers had for living authentically and finding community. Each of the Seattle and Dartmouth performers offered deep personal responses. A student performer recommended seeking out supportive friends. A Seattle artist added that true support included celebration and encouragement. Another Seattle artist suggested finding support by offering it to others. They proposed that attending and organizing events were effective ways to attract a mutually caring community. The next Seattle artist offered an introspective approach, stating, "Trust your instincts." Take criticism, they said, but always with a grain of salt. "Stay on your path." Two additional student performers emphasized finding friends who were appreciative of authenticity and who "push you to try new things."

The Q&A built on subjects examined during the Seattle artists' class visit to Rel 1.11. The performers reflected on ways that drag allowed them to address religious trauma. All three grew up in religious contexts with gender roles they had experienced as restrictive and harmful. Their performances occasionally incorporate religious themes, figures, and rituals to confront these experiences through art. At the same time, they discussed how drag scenes serve a religious function by fostering community gatherings, ritual practices, and senses of fulfillment. The conversation illustrated ways of thinking about religion both as a category of power in society and as a process of meaning-making that people can shape. These shapes took form in the evening drag show. The numbers featured critiques on gender and consumerism alongside themes of love, play, and "the spirituality of nature."

"It was absolutely phenomenal," Swenson concluded.