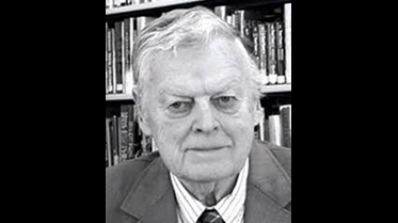 Fred Berthold Jr. '45, Preston Kelsey Professor of Religion, Emeritus, passed away on Wednesday, September 18, 2019, at Kendal at Hanover. Fred was born in Webster Groves, Missouri. He completed his undergraduate degree at Dartmouth in 1944 (a year early) and received his PhD in Religion from the University of Chicago. He joined the faculty of Dartmouth in 1949 and became the first dean of the William Jewett Tucker Foundation (1957-1962). He was appointed the first Preston H. Kelsey Professor of Religion in 1971 and retired from the college in 1993. He was the author of "The Fear of God: The Role of Anxiety in Contemporary Thought" (Harper, 1959) and"God, Evil, and Human Learning: A Critique and Revision of the Free Will Defense in Theodicy" (SUNY Pr., 2004), and co-edited "Basic Sources of the Judeo-Christian Religion" (Prentice-Hall, 1962) and "The Future of Empirical Theology" (University of Chicago Pr., 1969).

You can listen to two oral history interviews with him (conducted at Dartmouth College in 1998 and 2008), here:

At the memorial service held for Fred on Saturday, October 12, at the Kendal at Hanover Gathering Room, Ronald M. Green, Eunice and Julian Cohen Professor for the Study of Ethics and Human Values in Religion, Emeritus, remembered his late colleague's "kindness, his intelligence, his patience, and his utter decency" (read more of Ron Green's remarks