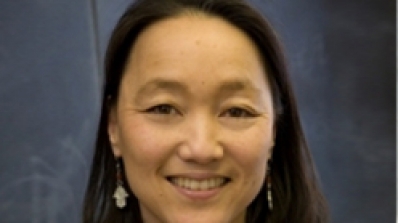 Professor of Religion Reiko Ohnuma has just been named Chair of the Dartmouth Department of Religion, effective July 1, 2018. Prof. Ohnuma is a specialist in the Buddhist traditions of South Asia (with a particular focus on narrative literature, hagiography, and the role and imagery of women), but also teaches courses on Hinduism. She holds a B.A. from the University of California (Berkeley) and an M.A. and Ph.D. from the University of Michigan (Ann Arbor). She is the author of Head, Eyes, Flesh, and Blood: Giving Away the Body in Indian Buddhist Literature (Columbia University Press, 2007); Ties That Bind: Maternal Imagery and Discourse in Indian Buddhism (Oxford University Press, 2012); and Unfortunate Destiny: Animals in the Indian Buddhist Imagination (Oxford University Press, 2017). She will be teaching Rel. 41.03, “Women, Monasticism, & Buddhism” (identical to WGSS 44.07), in Winter Term, 2019. (Professor Ohnuma's key to building a successful writing practice? Yoga! Read her interview in Library Muse: Inspiring Ideas From the Dartmouth Library.)