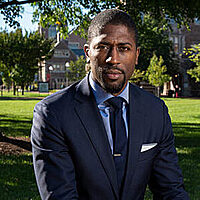 Abstract: Americans looked to J. Edgar Hoover as the Bishop of Christian America and his FBI as a crusading army protecting Christian America. If scholars of religion view Billy Graham as America’s pastor, consider that J. Edgar Hoover was America’s Bishop. The FBI is not usually a part of public discussions concerning the making of the religious right or Christian America. However, the FBI did more than just surveil faith, it actually had its own religious devotions, and religious partners. Although scholars have not taken Hoover’s faith seriously and, by extension, the religious devotion of the FBI, most Americans during Hoover’s lifetime did. They viewed Hoover and the FBI as an engineer and authenticator of Christian America. Newly de-classified FBI files of ministers, Christian publications, and organizations offer an abundance of personal correspondence, photographs, and material ephemera that shed new light on the FBI’s relationship to America’s religious landscape.

Lerone A. Martin is Associate Professor in Religion and Politics at the John C. Danforth Center on Religion and Politics at Washington University in St. Louis. He is the author of the award-winning Preaching on Wax: The Phonograph and the Making of Modern African American Religion (New York University Press, 2014), which tracks the role of the phonograph in the shaping of African American religion, culture, and politics during the first half of the twentieth century. The book was the 2015 recipient of the prestigious Frank S. and Elizabeth D. Brewer Prize for outstanding scholarship in religious history by a first-time author from the American Society of Church History. He has also served as a research consultant for continuing education and recidivism at New York’s Sing Sing State Prison, as well as an instructor at Georgia’s Metro State Prison. Currently he is an instructor at the Missouri Eastern Correctional Center. His commentary and writing have appeared in popular media outlets including The New York Times, The Washington Post, The Boston Globe, and CNN. He is writing a book on the relationship between religion, the FBI, and national security in American history to be published by Princeton University Press.

Sponsored by the Department of Religion, the Office of Institutional Diversity and Equity at Dartmouth, the African and African-American Studies Program, and the Rockefeller Center.

Funded by the Department of Religion and the Office of Institutional Diversity and Equity at Dartmouth.