Michelle Wang (Georgetown). "Dunhuang: Buddhist Art at the Crossroads of Asia." Free and open to all. Reception follows 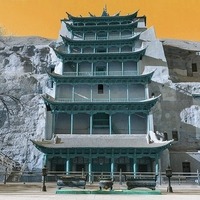 Michelle C. Wang teaches courses in Asian art history from the premodern to contemporary eras in the Department of Art and Art History at Georgetown University. Her research focuses on Buddhist visual and material culture in China, particularly during the Tang Dynasty (618-907 CE). Her book Mandalas in the Making: The Visual Culture of Esoteric Buddhism at Dunhuang (2018) examines Buddhist mandalas of the eighth to tenth centuries at the Mogao Buddhist cave shrines in northwestern China and is the first scholarly monograph on Buddhist mandalas in China. She co-directed the Georgetown-IDP Project for North American Silk Road Collections and was a co-organizer of the 2014-2015 Mellon Foundation-funded Sawyer Seminar “Critical Silk Road Studies.” Her research and publications have been supported by fellowships and grants from the Metropolitan Center for Far Eastern Art Studies, the Li Ching Foundation, the T’ang Studies Society, the Chiang Ching-kuo Foundation, the Asian Cultural Council, Association for Asian Studies, and the Pittsburgh Foundation.